Monday morning we drove out to Nsuta to visit Mama Rose’s school; this would be my second visit, and I was returning almost one year later to the day.  I paid little attention to the countryside as the driver sped along at 50 mph on an unmarked road lined with pedestrians on either side. Driving in Ghana is somewhat chaotic, but everyone pays attention.  Probably the best training for Ghana driving would be the video game Mario Kart, except played without hitting anything.  That’s why I chose not to pay attention; the ride would be less stressful that way.  Instead, my hostess and I talked about ontology, theology, metaphysics, environmentalism, neo-colonialism and Ghana’s 52-year independence. 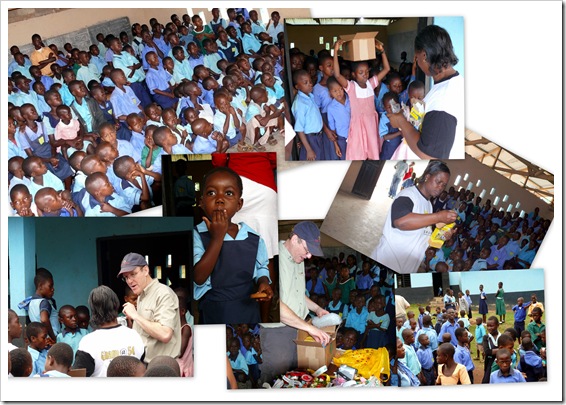 My first thought as we pulled into the school was that the large — no, HUGE tree that we saw last year was gone.  But other changes lifted my heart:  the auditorium, which one year ago had walls barely four feet tall, was not close to the point of being roofed. The students were lined up by grade, and were preparing to go into their rooms.  Today was a special day for me, because I was bearing letters, valentine cards, and Girl Scout cookies from a Girl Scout troop in the US.  The gift of love and friendship was received with lots of smiles… and the cookies with lip-smacking delight. 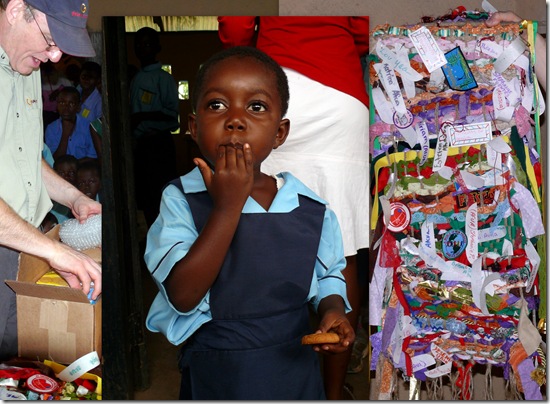 More than 200 students attend the school, and about 25 live on the campus.  These students receive two meals a day — meals that are prepared in a pot on a traditional open fire pit.  There are about 3 computers, each over 7 years old, which the 200 students share in turns.  Do the math — they don’t get much time on the computers very often, and their experience is very "explorational".   Rose Donkor, the headmistress, hopes that at least the best-performing of her graduating students will be able to go to college.  The irony is that the highest scoring students are assigned by the government to the best schools — which tend to be more expensive, and out of reach of all of these students.  Tuition at the colleges is about 3,000 per year. At the end of my visit, Rose tells me she wants to organize a Girl Guides (African Girl Scouts) group at the school.  I’m impressed with this thought as I leave — the school’s motto "Children with vision" is likely to become reality, because of the vision of the headmistress.  She knows the ancient proverb that says "without a vision, the people perish."  Perish isn’t on her list for her children or for her country.